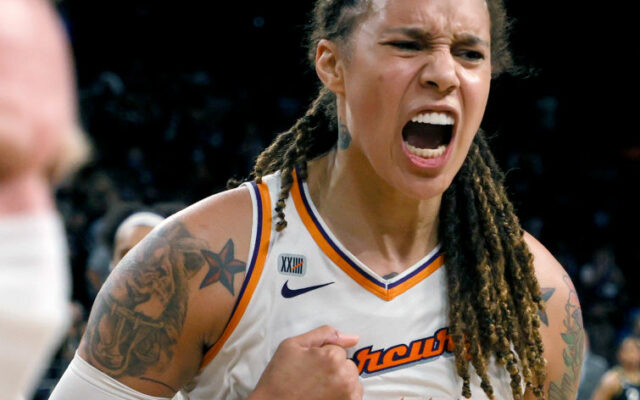 LAS VEGAS, NEVADA - OCTOBER 08: Brittney Griner #42 of the Phoenix Mercury celebrates after the team defeated the Las Vegas Aces 87-84 in Game Five of the 2021 WNBA Playoffs semifinals to win the series at Michelob ULTRA Arena on October 8, 2021 in Las Vegas, Nevada. NOTE TO USER: User expressly acknowledges and agrees that, by downloading and or using this photograph, User is consenting to the terms and conditions of the Getty Images License Agreement. (Photo by Ethan Miller/Getty Images)

“The Department of State has determined that the Russian Federation has wrongfully detained U.S. citizen Brittney Griner,” a State Department official said to ESPN on Monday. “With this determination, the Special Presidential Envoy for Hostage Affairs Roger Carstens will lead the interagency team for securing Brittney Griner’s release.”

While officials did not specify the reasoning behind the reclassification, it now brings a sense of urgency to getting the 31-year-old Phoenix Mercury player back into the U.S.

“Brittney has been detained for 75 days and our expectation is that the White House do whatever is necessary to bring her home,” Griner’s agent, Lindsay Kagawa Colas, said in a statement on Tuesday.

What do you think will need to be done to get Brittney Griner back into the U.S.? How much longer do you think she will be detained in Russia?

The WNBA will reportedly pay tribute to detained star Brittney Griner for its season opener.

According to the Associated Press, the league will honor Griner with floor decals of her initials and no. 42 on the floor of all home teams on Friday night.

Griner’s team, the Phoenix Mercury, has also been reportedly approved to pay the detained basketball star.

Griner has been detained in Russia since February for allegedly attempting to bring cannabis through a Moscow airport.

Do you think Brittney Griner will eventually get to come back to the U.S.? Will she get to play basketball in the WNBA again?