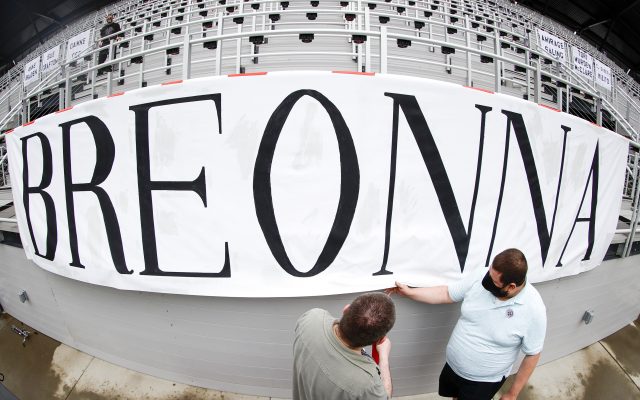 LOUISVILLE, KENTUCKY - APRIL 10: A sign in remembrance of Breonna Taylor is seen in a game between Racing Louisville FC and the Orlando Pride at Lynn Family Stadium on April 10, 2021 in Louisville, Kentucky. (Photo by Tim Nwachukwu/Getty Images)

The officer who shot at Breonna Taylor during a raid is retiring. Sgt. Jonathan Mattingly plans to retire from the Louisville Metro Police Department on June Mattingly was shot in the leg during the raid by Taylor’s boyfriend, before opening fire. In a statement, Mattingly said, “I’ve never taken lightly the responsibility that comes along with serving the great citizens of Louisville. It’s my hope and prayer, that moving forward, our city can heal and unite. My plan was not to move on from this calling, but in the best interest of my family, the time has come.”