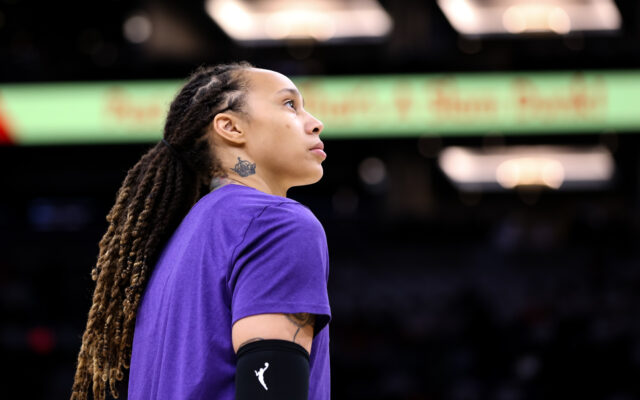 PHOENIX, ARIZONA - OCTOBER 10: Brittney Griner #42 of the Phoenix Mercury durring pregame warmups at Footprint Center on October 10, 2021 in Phoenix, Arizona. NOTE TO USER: User expressly acknowledges and agrees that, by downloading and or using this photograph, User is consenting to the terms and conditions of the Getty Images License Agreement. (Photo by Mike Mattina/Getty Images)

Before Game 3 of Wednesday’s NBA Finals between the Celtics and Warriors, NBA commissioner Adam Silver talked about the detainment of WNBA star Brittney Griner. Appearing on “NBA Countdown,” Silver shared details of how the league is has been involved in Griner’s case. “Well, actually, what spurred us, you used the words ‘wrongfully detained,’ and so that is an official designation used by the U.S. government,” said Silver. “Initially, when she was detained, even though we all knew what was going on, we were told by the U.S. government to keep it a little bit more as a low-profile issue I think because they were hoping that Russia frankly wouldn’t see her as such a high-value asset, in which they would be looking to get something in return for her.” “Clearly now everyone understands how important she is, how well known she is in this country, how important she is in the WNBA,” Silver added. “At this point, I think for all of us, we have to bring as much attention to her case as possible, and get her home safely as quickly as possible.” As of June 9, Griner has been detained in Russia for 112 days. How much longer do you think Brittney Griner will be detained in Russia? What else can the league do to help?