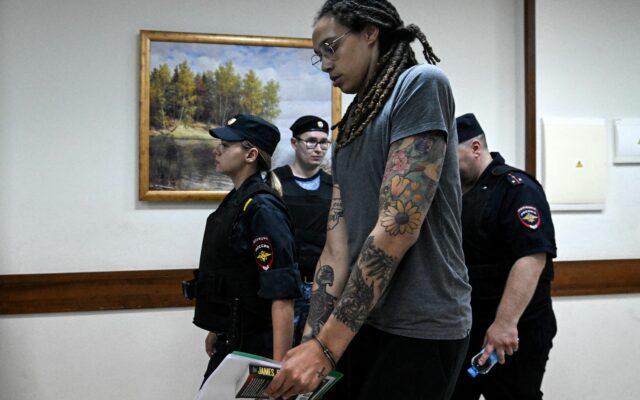 US Women's National Basketball Association (WNBA) basketball player Brittney Griner, who was detained at Moscow's Sheremetyevo airport and later charged with illegal possession of cannabis, leaves the courtroom after the court's verdict in Khimki outside Moscow, on August 4, 2022. - A Russian court found Griner guilty of smuggling and storing narcotics after prosecutors requested a sentence of nine and a half years in jail for the athlete. (Photo by Kirill KUDRYAVTSEV / AFP) (Photo by KIRILL KUDRYAVTSEV/AFP via Getty Images)

A Russian court has denied the drug sentencing appeal of WNBA star Brittney Griner. According to the Associated Press, the court made adjustments to Griner’s term by counting each day she was held before the trial. Griner will now serve eight years instead of the originally sentenced nine. Griner was arrested in February for smuggling in less than a gram of cannabis oil in her luggage while playing in Russia during the WNBA’s off-season. Do you think the U.S will be able to get Griner back? What will need to be done?