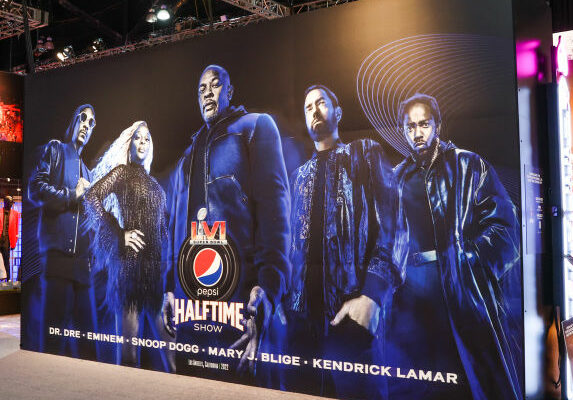 LOS ANGELES, CALIFORNIA - FEBRUARY 04: The Rock & Roll Hall of Fame and NFL's "The Biggest Show on Turf: 56 Years of Halftime Shows" exhibit is seen during a press preview of the Super Bowl Experience Presented by Lowe’s at Los Angeles Convention Center on February 04, 2022 in Los Angeles, California. (Photo by Rich Fury/Getty Images)

To say that Mary J. Blige is excited to be a part of the Super Bowl Halftime Show is an understatement.

Sunday, she will take the stage with Kendrick Lamar, Eminem, Snoop Dogg, and Dr. Dre for what is expected to be a huge moment for music at the Super Bowl.

“Man this thing is the most epic thing in music,” Mary said about the halftime show. “I watched the rehearsals and had goosebumps watching it.”

Mary isn’t a stranger to the Super Bowl stage, she first performed in 2001 with N’SYNC and Aerosmith.

What song do you think Mary will perform on Sunday? What are your top three Super Bowl music moments?

One of the highlights of the big game is going to be the halftime show as the who’s who of hip-hop plan to take the field at So-Fi Stadium in Inglewood, California.

During a press conference Snoop, Mary J. Blige, and Dr. Dre answered questions and built anticipation for their halftime show.

While the performance will be legendary, one of the artists might have been planning a legendary moment of their own.

“I had to talk Snoop and Eminem out of pulling their penises out,” the Compton native said earlier today, then clarifying that actually, “it’s just Eminem.” There will be no wardrobe malfunctions or indecent exposures just a lot of musical surprises and fun.

Which halftime performer are you excited to see?