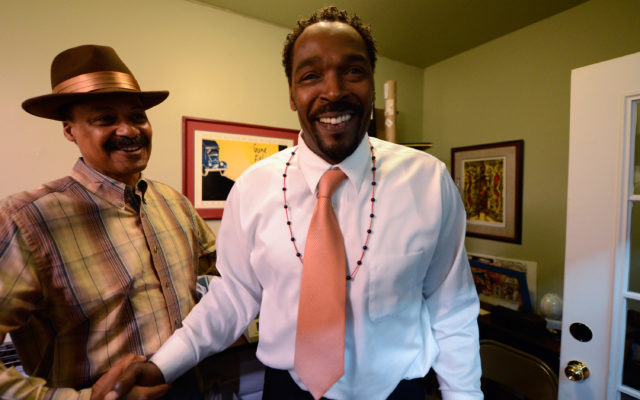 LOS ANGELES, CA - APRIL 30: Rodney King (R) is greeted by Firpo Carr as he arrives at EsoWon bookstore to sign copies of his new book, "The Riot Within: My Journey From Rebellion to Redemption," on April 30, 2012 in Los Angeles, California. King is best known as the victim of a brutal police beating that took place in Los Angeles. It’s been 20 years since the Rodney King verdict that sparked infamous L.A. Riots. (Photo by Kevork Djansezian/Getty Images)

George Holliday, who opened the world’s eyes to racial injustice among police officers when he caught the Rodney King beating on video, has died of COVID-19, a friend says. He was 61 years old. Holliday, who lost his battle with the virus Sunday in Simi Valley, California, was not vaccinated, according to longtime friend Robert Wollenweber. “Unfortunately, he didn’t want to get vaccinated,” Wollenweber says. “He wanted to get the COVID so he could build immunities — and his wish came true about a month ago.” Holliday was thrust into the limelight in March 1991 after he captured video of L.A. cops beating King from the balcony of his apartment. The video aired repeatedly on national TV and was a key piece of evidence in the four officers’ trials. Although the cops were acquitted on all charges, two of them were later found guilty of violating King’s civil rights. Why didn’t the Rodney King incident spark a revolution as big as the one caused by George Floyd’s death?

Series Premiere of #Queens TONIGHT at 10/9c on ABC, and Stream on Hulu!