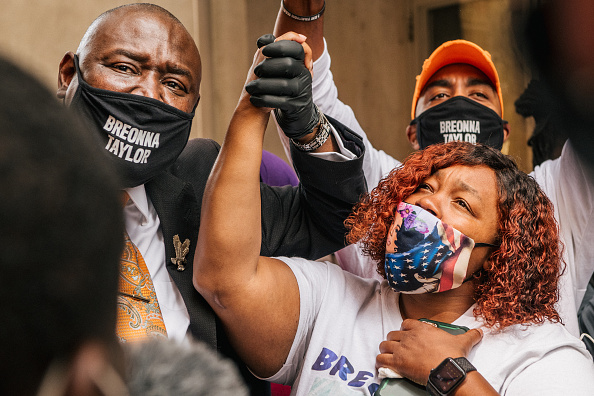 LOUISVILLE, KY - SEPTEMBER 15: Attorney Ben Crump and Tamika Palmer, mother of Breonna Taylor, celebrate after a news conference on September 15, 2020 in Louisville, Kentucky. It was announced that the city of Louisville will institute police reforms and pay $12 million to the family for the killing of Breonna Taylor, who was fatally shot by Louisville Metro police officers during a no-knock raid at her apartment on March 13, 2020. (Photo by Brandon Bell/Getty Images)

The Louisville Metro Police Department on Monday announced a state of emergency as it prepares for a grand jury decision in the Breonna Taylor case.

WAVE 3 News obtained a memo sent by LMPD Interim Chief Rob Schroeder, addressed to all personnel, that read in part:

“To ensure we have the appropriate level of staffing to provide for public safety services and our policing functions, effective immediately the LMPD will operate under the emergency staffing and reporting guidelines as outlined in the Standard Operating Procedures, Emergency Reponse Plan and collective bargaining agreements until further notice.”

Earlier Monday, LMPD had canceled all requested off days for officers effective immediately. The decision came after talks among department leaders about their expectations for a possible announcement in the Taylor case being made “soon.”