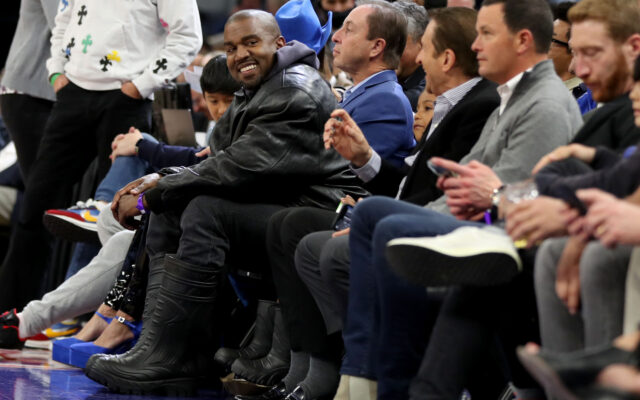 SAN FRANCISCO, CALIFORNIA - MARCH 16: Kanye West, center, and his son, Saint West, got front row seats next to Golden State Warriors co-owners Joe Lacob and Peter Guber as they watch the game against the Boston Celtics in the second quarter at Chase Center in San Francisco, Calif., on Wednesday, March 16, 2022. (Photo by Ray Chavez/MediaNews Group/The Mercury News via Getty Images)

One person is happy Kim Kardashian and Pete Davidson broke up. Kanye West. He returned to Instagram with a post made to look like the cover of the New York Times. The headline said, Skete Davidson dead at  age of 28. Oh, Kanye wasn’t done taking his shots. Underneath the headline in tiny print it said, Kid Cudi meant to play funeral but fearful of bottle throwers. Do you think Kanye is going to go all out to win Kim back or do you think he will respect that their marriage is over?