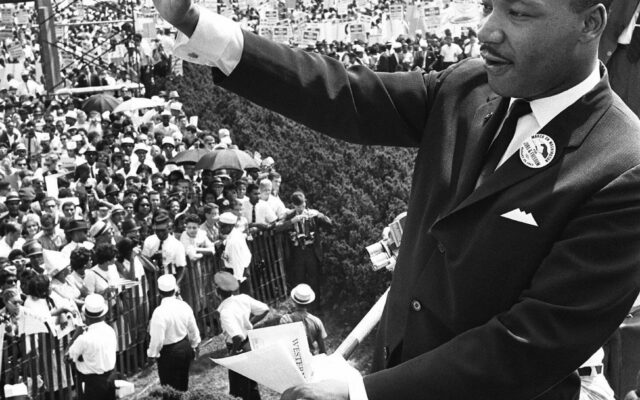 WASHINGTON, UNITED STATES: (FILES) US civil rights leader Martin Luther King, Jr. waves to supporters in this 28 August 1963 file photo, from the Lincoln Memorial on the Mall in Washington DC, during the "March on Washington". On the steps of the Lincoln Memorial, King delivered his "I Have a Dream" speech, which is credited with mobilizing supporters of desegregation and prompted the 1964 Civil Rights Act. King was assassinated on 04 April 1968 in Memphis, Tennessee by James Earl Ray, who confessed to the shooting and was sentenced to 99 years in prison. King would have turned 76 on 15 January 2005, and the US celebrates his birth as a national holiday on 17 January. AFP PHOTO/FILES (Photo credit should read -/AFP via Getty Images)

Martin Luther King Jr. is lauded as one of the greatest leaders of all time. Assassinated on April 4, 1968, it’s been 54 years since his death and his words still ring true today. Here are some of his most famous quotes:

“Injustice anywhere is a threat to justice everywhere.” (Letter from Birmingham City Jail)

“We must use time creatively, in the knowledge that the time is always ripe to do right.” (Letter from Birmingham City Jail)

“Oh, there will be a day, the question won’t be, ‘How many awards did you get in life?’ Not that day … The question that day will not be, ‘What kind of automobile did you have?’ On that day the question will be, ‘What did you do for others?'” (“The Three Dimensions of a Complete Life” sermon)

“As long as there is poverty in this world, no man can be totally rich even if he has a billion dollars.” (“The American Dream”)

What is your favorite quote from Martin Luther King Jr.?