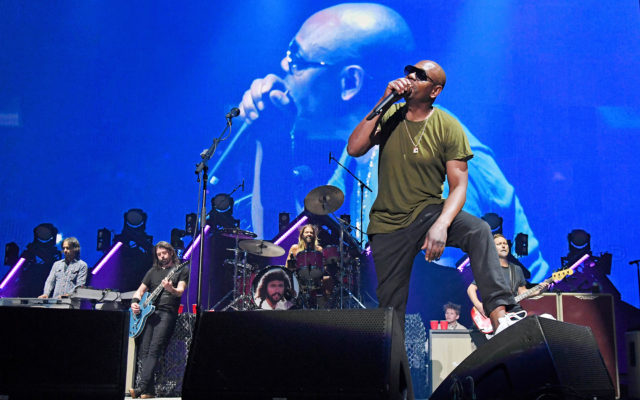 NEW YORK, NEW YORK - JUNE 20: Dave Chappelle performs "Creep" onstage with The Foo Fighters as they reopen Madison Square Garden on June 20, 2021 in New York City. The concert, with all attendees vaccinated, is the first in a New York arena to be held at full-capacity since March 2020 when the pandemic lead to the closure of live performance venues. (Photo by Kevin Mazur/Getty Images for FF)

Dave Chappelle’s documentary, Untitled: Dave Chappelle Documentary, made its debut at the Tribeca Film Festival over the weekend. Attendees got a first look at Academy Award-winning filmmakers Julia Reichert and Steven Bognar’s work as they documented their neighbor’s attempt to bring back live shows in their small town of Yellow Springs, Ohio.  “We have a neighbor. His name is Dave. We see him at the grocery store and on the street. When Dave came to us with the idea, we were immediately struck by the challenge to tell the story of our part of the world during the pandemic and the national reckoning on racial injustice. This was a historic moment and we really wanted to chronicle this place and this time, it just felt right,” Reichert and Bognar said as they introduced the film.  Along with laughs, Chappelle served up music to the 6,000 who were in attendance at the festival. Fat Joe, Q-Tip, Ghostface Killah, De La Soul, Redman, and DJ Clark Kent gave a 30-minute performance.  What was supposed to be a weekend event turned into 50 sold-out shows for Chappelle. Which events helped you get through the quarantine? “Verzuz,” Dave Chapelle’s comedy, social media lives?