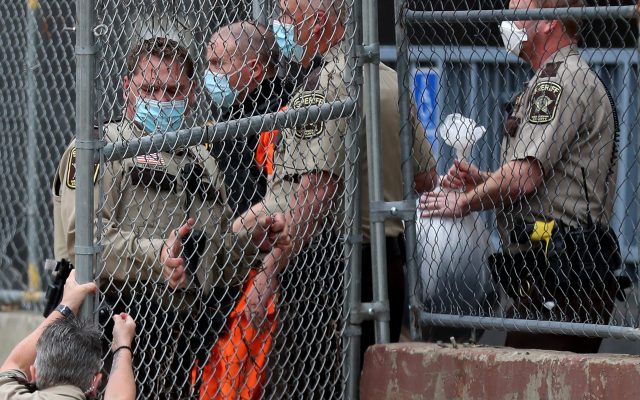 MINNEAPOLIS, MN -- SEPT. 11: A law enforcement officer goes down while opening a gate for fired Minneapolis police officer Derek Chauvin as fellow officers escorted Chaurin from the rear of the Family Justice Center after a motion hearing Friday in Minneapolis. A judge heard oral arguments Friday morning on several pending motions in the cases against four former officers in the killing of George Floyd, including motions to dismiss the cases. (Photo by David Joles/Star Tribune via Getty Images)

Derek Chauvin and three other former Minneapolis police officers have been indicted on federal civil rights charges in connection with the death of George Floyd. The Justice Department announced the charges on Friday, after a grand jury ruled that the officers “willfully deprived” Floyd of his constitutional rights during the May 2020 arrest. Last month, Chauvin was found guilty of second-degree murder in Floyd’s death.  The other three officers – Thomas Lane, Tou Thao, and J. Alexander Kueng, are all facing charges for failing to stop Chauvin from using unreasonable force. The federal charges announced Friday are separate from those other charges filed by the state.