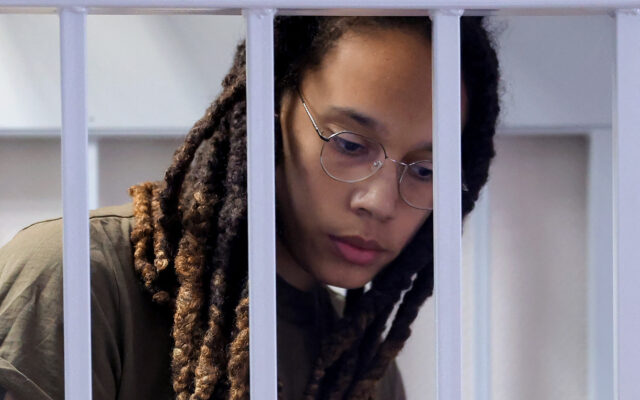 US basketball player Brittney Griner stands in a defendants' cage before a court hearing during her trial on charges of drug smuggling, in Khimki, outside Moscow on August 2, 2022. - Griner was detained at Moscow's Sheremetyevo airport in February 2022 just days before Moscow launched its offensive in Ukraine. She was charged with drug smuggling for possessing vape cartridges with cannabis oil. Speaking at the trial on July 27, Griner said she still did not know how the cartridges ended up in her bag. (Photo by EVGENIA NOVOZHENINA / POOL / AFP) (Photo by EVGENIA NOVOZHENINA/POOL/AFP via Getty Images)

The Russian government says it’s ‘ready to discuss’ a prisoner swap for Brittney Griner. Russian Foreign Minister Sergey Lavrov said Vladimir Putin and President Biden had established a ‘special channel’ to work out a possible deal. On Thursday, Griner was sentenced to nine years in prison on drug smuggling charges  – a sentence Biden called “unacceptable”. It’s been reported that the U.S. is offering notorious arms dealer Victor Bout in exchange for Griner and former Marine Paul Whelan. Do you think a deal will be worked out?  Was Griner’s arrest and conviction a political ploy on Russia’s part?